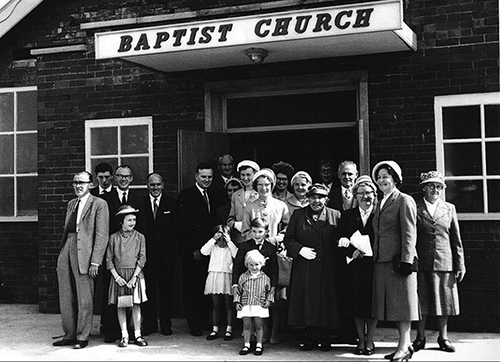 The Leyland Baptist Church started as a tent mission in the summer of 1959, led by Fred Wilson, who was the Minister at Carey Baptist Church in Preston. Initially the Church met in the home of one of the first members, Molly Fleming, then later being held at a scout hut in Cow lane, just off Fox lane in Leyland. As the numbers increased a more permanent location was needed, so in 1962 a bungalow on Leyland Lane was purchased and modified. In 1975 there was the addition of a Church Hall at the rear of the Church. This bungalow is still our current location today. The first Leyland Baptist Pastor at that time was Will Rostron who held the ministry until he retired in 1980. A welsh Baptist Minister called Arthur Phillips took over. Arthur was the Pastor for about 3 years when he retired leaving the church. Rev. John James took over as pastor until 1985. This left the church without a Pastor until 1988. During this period the numbers dropped. In 1988 a new Pastor entered the scene, Adrian Argile, straight from Spurgeon’s College. Adrian's strong focus on mission saw a period of vigorous growth in numbers at the church and together with Tim Grose who was appointed as a Community Worker with Spurgeon’s Childcare, and other Church Members, started the SLEAP charity in 1992 http://www.sleap.co.uk/index.php/en/ and the Leyland project http://www.leylandproject.org.uk/  In 1996 Adrian felt his mission lay elsewhere so left to go to Kay Street Baptist Church, Rawtenstall. Geoff King was asked to take over the ministry here at Leyland in 1999 following a difficult period without a Pastor. He and his wife Kate helped consolidate the work in the Church and community. Our present ministers, Tony and Sandra Crawford, came from Heywood Baptist Church in September 2003, taking over as Geoff phased into retirement. Tony and Sandra have continued to see the life of the Church develop and Tony has been instrumental in the work of SLEAP and the Leyland Project, which are local independent charities. After twenty years of hope and prayer there have been major modifications to the Church Hall to create a new Community Hall with new toilets, new kitchen, offices and reception area. The building work was completed in 2013 and we have since seen the congregation grow in numbers. The work was funded by the generous offerings by the congregation, two grants provided by Veolia Environmental Trust and the Lancashire Environment Fund. In September 2014 the Lancashire Environmental Fund awarded us Best Practice Award for Community Buildings.